High fashion in Rome is nearly as eternal as the city itself. Rome’s handcrafted, artisanal couture has persevered for decades.

The result? Timeless, wearable works of art that easily withstand the whims of mainstream fashion and continue to shape how we dress today. From the Colosseum to the Trevi Fountain and the Spanish Steps, Rome’s iconic sites are a rich source of inspiration for top designers.

Vogue defines her a dream and the best place to dream. Do you want to discover why?

It is the celebration of the creative immortality of an irrepressible city, so rich in history and beauty that it seems impossible to live. An unreal city, a set and a theater, a perennial scenario crossed by human flows made by tourists and inhabitants.

A long history of art, fashion and poetry. In one place: Rome. Capital not only of the flashy beauty of domes, terraces and open-air artwork, but also of the most spectacular wonders of her details, of her secret paths, from the pagan antiquity to the Middle Ages, from the Renaissance to today. 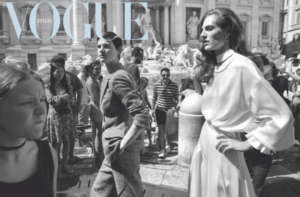 Vogue celebrated all this and the bond that distinguishes Rome and fashion, the High Fashion, putting Rome in its cover of September. Rome in the 1950’s when bon ton and luxury were the protagonists of worldly occasions, Rome of Sisters Fontana, Emilio Schubert, Emilio Pucci and Roberto Capucci. The Rome of Dolce Vita. Rome, which becomes the center and source of stylistic inspiration and seduction for the United States and the world, and which is still today.

An elegant culture made of extraordinary creativity in cinema, art, architecture that looks like fashion, a fashion that works on the past, making it contemporary. A bond with the genius loci of a multicultural city and open to all ferments and all influences, but also the integration of young and old crafts such as high tailoring that should not be lost. Rome and fashion are all this. 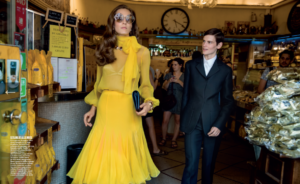 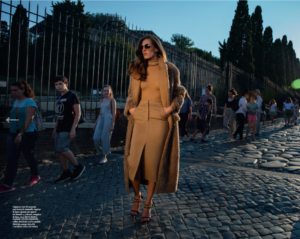 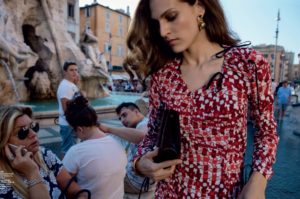 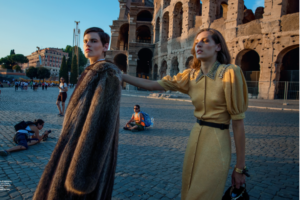 Rome is more than many other cities, she has a strong link with creativity, not by chance is the only city where there are the headquarters of academies around the world, a city that has been faced by poets, writers, painters, artists..she was a obligatory stop for the grand tour .. and still today it is.

How many fragments, suggestions… Rome forges the creatives and never abandons them. Rome city of art. It is a city that can dare a lot not only in terms of antiquity but also for its modernity. Creativity is found in all places, wherever you are but it is up to you to pick it up and keep it with a precious object.

The most important designers have grown thanks to the teaching of the Roman academies, they started their careers here in Rome and today they transmit us through their creations, all their great love for Rome. They share with us those moments (in a walk through the streets of the center, or during an art exhibition in a roman museum) that have been invaluable to inspire them and explain why they bring it into their hearts even if in some cases their careers have led them to work elsewhere.

Rome is the place of eternal creativity.

“The importance of being a Roman atelier, made by seamstresses and operators, girls and boys who have chosen and love this craft, with the roots of Roman couture all from the origins of this city that makes its couture the very soul of culture. The couture is the tradition revisited in a contemporary key. We wanted to make an exhibition that highlights the contrasts and the different origins of ancient Rome with the baroque, the intimate and romantic or that of Catholicism up to that of Pasolini, to discover it in a different way through connection and contrasts. We told a story, through our collections and exhibitions (as was the one at the Teatro dell’Opera) that have always given us a “strong identity”. Rome must have and strongly defend this identity that make it unique unlike other creative cities like Milan or Paris because it is a more “democratic” city because you cannot live the competition in Rome (against Bernini or Caravaggio …). In short, fashion is culture, it is our history, and we must defend this strong identity, unique in the world, that we have”.

Fendi decided to celebrate its 90th anniversary with the most breathtaking show ever. All the models walked on ethereal, translucent plexiglass runway stretched across Rome’s iconic Trevi Fountain. A special and eternal bond between fashion and history. A unique and exclusive stage that made shone the creativity and fancy of one of the most important Italian, but most of all, Roman brand.

“A fashion show in Rome at the Trevi Fountain is the best way to celebrate the 90th anniversary of Fendi, a unique opportunity to express our roots, the bold creativity and the highest craftsmanship that has always distinguished us – declared Pietro Beccari, President and CEO of Fendi. – The Trevi Fountain is a magical place that perfectly represents the values of Fendi, its tradition and its history, with an eye always focused on the future and its particular bond (and love) with the Eternal city”.

From the very beginning, Bulgari‘s jewels were inspired by the monuments and the splendor of the Eternal city, and this symbolic and artistic guiding thread has revealed itself in all its strength precisely in composing, completing and enriching the Bulgari Heritage Collection. A very special private collection, since it represents a national and international heritage, intertwined in an indissoluble way to the life and history of Rome.

“Bulgari owes much to the magical city of Rome, where the present and the past coexist – explains Jean-Christophe Babin, president of Bulgari. “Our collection aims to capture and pay tribute to the strength of the city made of history, timeless beauty and incessant flow of progress”.

An indissoluble bond, woven of energy and history, which has been renewed since 1884. A source of inspiration for many of Bulgari’s creations, the Eternal City echoes in the strongly identifying productions of the maison. An identity that can be found in the Latin inscriptions and in the 2700 years of the history of the Italian capital: using the narrative potential of coins, gold and precious stones, Bulgari tends towards the magnificent mosaics, streets, bridges and buildings that make up the image of Rome.

“I think the fact of being born in a city like Rome, with the familiarity with the past that this entails, has allowed me to face lightly even Paris and a house like the Christian Dior, where I was immediately told ‘you’re in a company made up of women.”

Rome was for her a starting point and a source of continuous inspiration. Rome is a city of art, where ancient and contemporary mix perfectly. And it is from here that the creative designer of Dior, Maria Grazia Chiuri, draws inspiration to give life to her wonderful clothes. For her, fashion needs to reflect on certain topics that art has already dealt with. Rome is a city made up of continuous suggestions and solicitations, creativity is everywhere if you can search, if you can see. Just look around once you are immediately struck by something. Many inspirations Maria Grazia Chiuri took them a long time before the creation of her collections, she keeps them secretly in her mind and then use them at the right time.

In her work she tries to combine the savoir faire of Parisian high fashion, which defines scenographic, and that of Italian haute couture that defines sartorial. It does not give up any of the schools of thought, rather it mixes them and makes them a perfect match.

The millenarian history of the city, is the life-blood of inspirations and will continue to carry all the creatives, artists and people around the world in this eternal journey.

Come to Bella Roma for your next shopping spree. Reserve your private Shopping Concierge and Tour with Roma Luxury. For more informations write to info@romaluxury.com