Discover the wonders of the Appia Antica also on horseback and  the Catacombs in style with our unique bespoke tours.

Roma Luxury astonishes you even by horse with it’s unique tours on the most famous ancient road “the Appian way”, catapulting you not only back in time but also though multisensoral experiences !

Imagine being able to discover the ancient ruins on the appian way on horse back , through a tour that will excite and delight all your senses even taste buds if you want to try real home made cooking and local wines and flavors as the travelers on this road would have thousands of years ago. 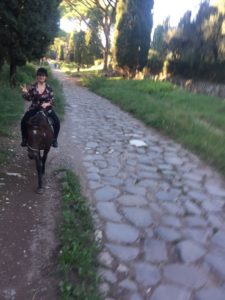 When you think of Rome, probably the first things that comes to mind is the Colosseum and not those mysterious corridors and old crypts and ancient tombs.

The Catacombs of Rome are located just outside the city and are made up of a series of underground tombs dug in the second century AD. The most significant are the Catacombs of San Callisto, in which 16 popes and about 30 martyrs were buried.

The Catacombs of San Callisto owe their name to the deacon Callisto, who was entrusted with the administration of the cemetery by Pope Zephyrinus in the third century. The catacombs became the official burial site of the Church of Rome. Christianity, at that time, was a faith still not widespread and while the Romans cremated their dead, the Christians preferred to bury them.The Roman religion prohibited burial within urban boundaries, so these catacombs and ancient nobility tombs were all created out of the walls.

The catacombs in theunderground: The small Vatican

There is an air of mystery in the corridors. The catacombs have a number of floors no lower than 4, some of which are located 20 meters below ground level. The most important section is dedicated to the popes, also known as the “Little Vatican”. The crypt of the popes of San Callisto is considered the most beautiful crypt of the catacombs and on its walls you can still see many original inscriptions, personal, religious, inspirational as tribute to the dead and pieces of live in those days, the love declared between loved ones and a leap in to timeless sensations.

The crypt of Santa Cecilia is another important site. Saint Cecilia, patron of music, remained buried here for 5 centuries. She died as a martyr around the year 230 and her body was lost for a long time. Her tomb was rediscovered together with the catacombs of San Callisto in 820 and Pope Pasquale I , ordered to build a church in the place where the saint actualy died, and had her body transferred there. The basilica of Santa Cecilia can be admired in the fascinating town district of Trastevere.

The corridors and rooms of the catacombs are rich in decorations with Christian symbols. Since at that time the Christians could not practice their faith openly, they painted and engraved symbols to express their beliefs. The most famous are the monogram of Christ, the fish and the Good Shepherd. The monogram consists of the Greek characters X and P, the first two letters that make up the Greek word meaning Christ. When these letters are engraved on a grave, it means that a Christian is buried there.

And if you want to see it in a really cool and unique way….We even have special horse riding tours to go where and how others by foot ( you can only walk down the ancient road) and with our horseman tour you get a exceptional escursion with a hovering sight over the ancient monumnets, ancient roads and over all : 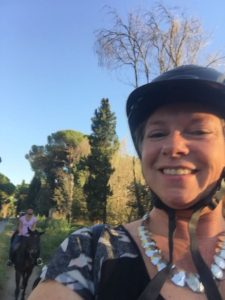 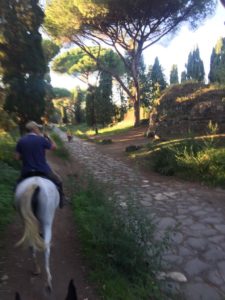 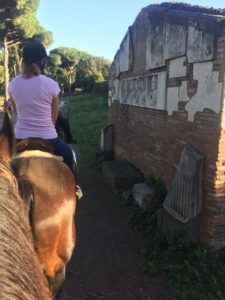 This area too has it’s “Sleepy Hollow” headless horseman that in the nights of the full moon goes looking around through these riuns to cut off someones head, so beware wandering around in this area by night if you don’t want to loose your head too here 🙂

If you are curious of the story behind this headless horse man of the ancient Appian way then Ask for us to create your unique tour now at info@RomaLuxury.com and book your EXPERIENTIAL TOUR/S NOW TO KNOW MORE ON THIS AND MANY JAWDROPPING STORIES IN ROME 😉