Pantheon: the great beauty of Rome

Pantheon: the most important temple consecrated to all the Gods

Sting for a second, try to understand the essence behind this monument … do not you hear anything? Can you hear the echo of distant times?

We are in Piazza della Rotonda, where the incredible wonder of Rome stands with all its magnificence… that is the Pantheon is. 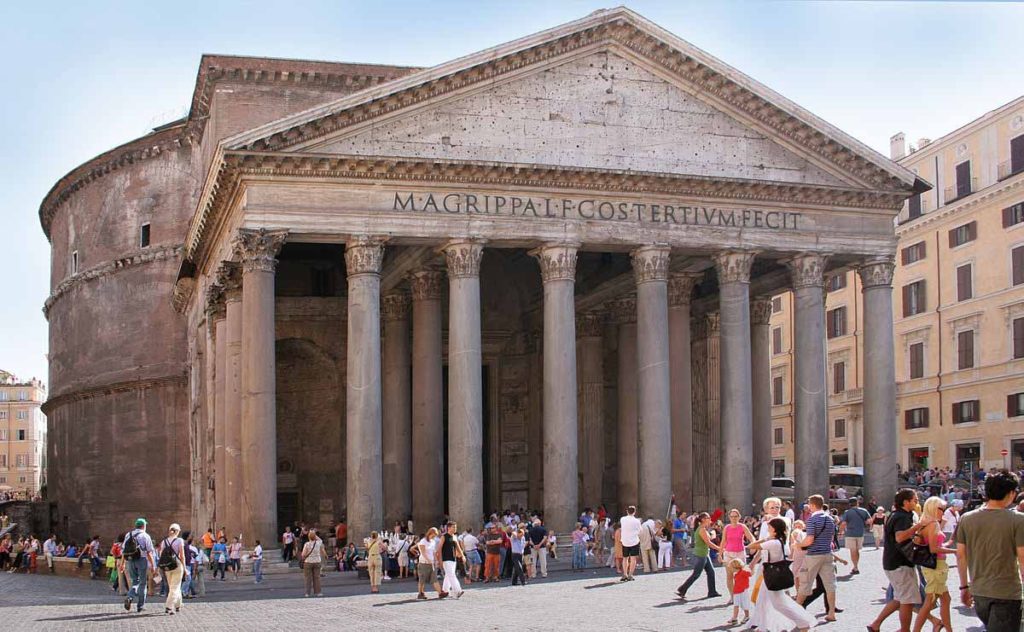 The Pantheon was originally built in the 27th c. By Marco Agrippa, generous of Augusto, but was rebuilt by Emperor Adriano after some fires, between 120 and 124 dC. On the pediment you can see the inscription, re-mounted by Adriano, which indicates that it was built by Marco Agrippa, son of Lucio, consul for the third time.

Pantheon was born as a pagan temple (pan = all, theon = of), the temple of all Roman gods. In the year 604 the pagan temple became a Christian church by the will of Boniface IV, who dedicated it to “S.Maria to Martyrs”: this “dedication” made the rumor (perhaps rightly) circulate that 28 wagons had been thrown into the floor Bones of martyrs taken to the catacombs.

Now look up and enjoy the dome show. It will be less famous than that of St. Peter, but surely the dome of the Pantheon is one of the symbols of Rome, which for millennia has weathered and “spoliation”. The dome is famous for its large hole in the center, called “oculus”, which is the only source of light throughout the building. Think that the Pantheon was designed so that a sunbeam, during the summer solstice, at noon, penetrated the oculus and hit the access door. A unique spectacle, celebrating the close bond between this building and the sky, is home to all gods. A legend says that the dome in antiquity was sealed with a large bronze cone that the devils had carried from Troy to Constantinople and then to Rome, and that when Pope Boniface consecrated the Pantheon as a church, evil spirits fled from ‘Oculus, carrying behind the pine cone!

The dome has the peculiarity of not being completely closed, at the top there is an opening, oculus, which attracts many curiosities. For example, many wonder if, when it rains, the water passes inside or not. The answer is yes! No puddles or stagnations are formed thanks to a series of holes in the floor that let the water run down, but rain comes in, though there are legends that say the other way around. 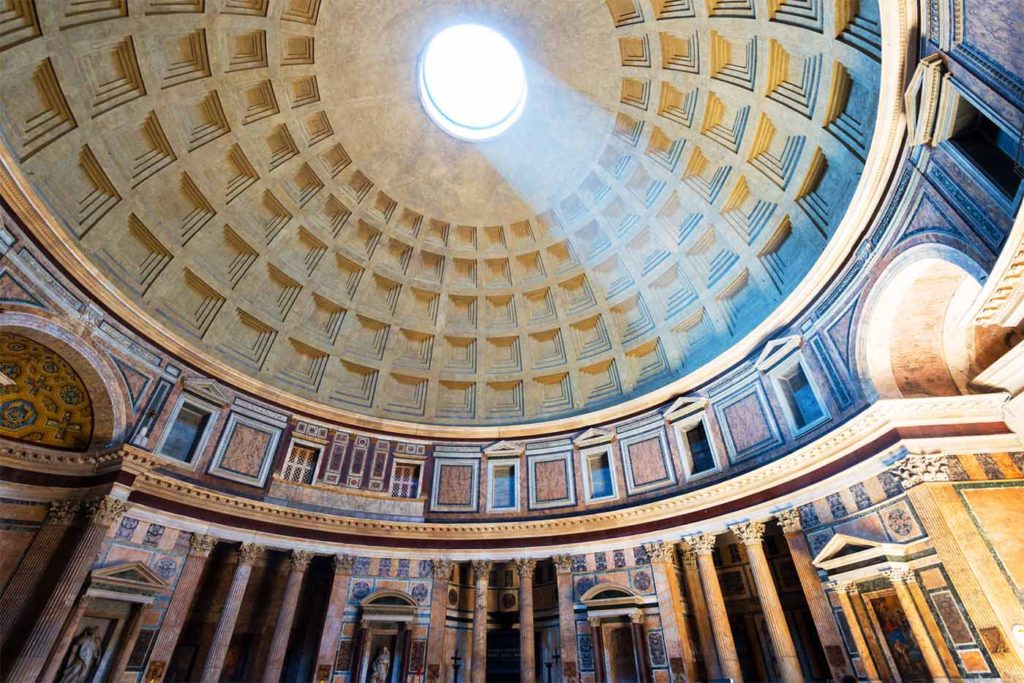 The modern glory of the building resides in the “sepulchral” character he has assumed since Raffaello was buried in 1520: an epigraph written by Cardinal Pietro Bembo on his tomb says that “Here is the Raffaello from whom, , Mother Nature feared to be overcome, and when he died she was afraid of dying with him. “ Since then, all the artists aspired to emulate the supreme painter, until in 1878 the temple became a shrine of Italy: in fact, the sovereigns were buried Vittorio Emanuele II and Umberto I.

A particular ceremony painted the Pantheon at a certain time of the year: the Sunday between Ascension and Pentecost, during which, during the papal Mass, a lofty rain of rose petals dropped on the faithful from the dome of the dome. The miracle of Pentecost: it was called, from the Romans, the “roses sun”. It’s a magical experience to live!

As you have been able to read, it is worth a visit, perhaps just as a ray of light penetrates its great eye and illuminates this truly unique building!

Rome is one of the world’s most fascinating, culturally rich and seductively romantic cities. It is home to glorious reminders of the Roman Empire. You will be amazed by the beauty of the city – the architecture, the timeless grandeur – and also by all the hidden places to be discovered. You get a real sense of Rome, smell the warm, fresh-from-the-oven aromas of a bakery or the rich handmade leather of a local craftsman.  You will love getting lost in the tiny streets.

If you do not know the Eternal City or if you want to rediscover it in a new, shining and luxury light, It is the ideal time to take full advantage of the wonders of this beautiful city.

We at Roma Luxury assure every kind of comfort to our travelers. Site seeing, unique tours and emotional shopping. Our mission is to give the high-end tourist, the best time of their life in Rome by satisfy any luxury traveler needs and wants. We personally choose, based on high quality and service, all the offerings we propose to our clientele. Shopping like a Star… Treated as a VIP… Experience the real Italian Excellences!

Click the link below and find your dream tour to live Rome in a luxury way!!!