It is the case to say amen!

Opulence, solemnity and ostentation, these are the three key words that characterized the dress code of the highly anticipated MET Gala 2018 (the most prestigious fashion event of the year) that took place yesterday at the Costume Institute of the Metropolitan Museum in New York and that represents this year’s theme Heavenly Bodies: Fashion and the Catholic Imagination.

Sarah Jessica Parker undoubtedly made a beeline for Italian designer Dolce & Gabbana when the religious theme of this year’s Met Gala was announced, her sumptuous gold gown topped off with an elaborate and slightly wobbly nativity-scene headpiece. 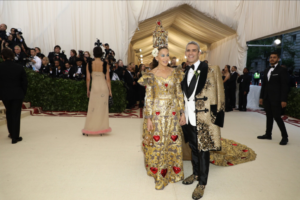 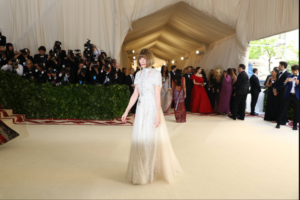 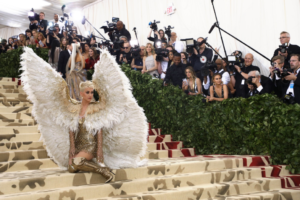 Designer and another of the Met Gala 2018 co-chairs Donatella Versace wears one of her own designs, an embroidered navy and gold mini-dress topped with a sweeping navy overskirt. 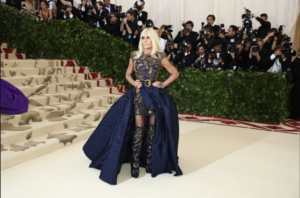 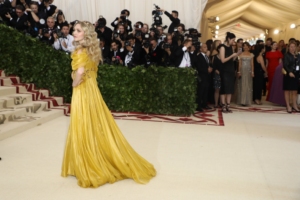 All hail the pope. After arriving in her own pope-mobile, Rihanna had her own take on papal style with her custom designed Maison Margiela gown, she fearlessly dressed like the female pope the Vatican’s never had. 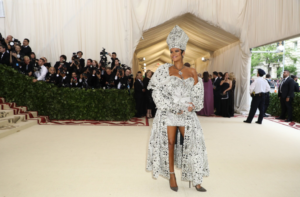 Ariana Grande looked to the Sistine Chapel for the inspiration behind her Vera Wang gown, which is screen printed with images from Michelangelo’s iconic fresco, the Last Judgement. 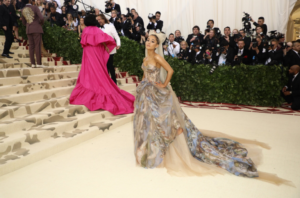 Lana Del Rey and Jared Leto went fully Mary and Jesus with their elaborate Renaissance-inspired outfits designed for the pair by Gucci. 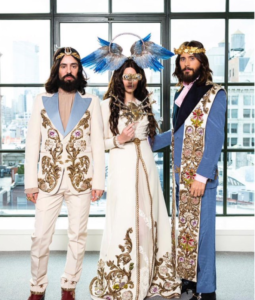 Like a prayer: fr someone who has been, by her own admission, ex-communicated by the catholic church a couple of time, Madonna was positively present and correct in her Jean Paul Gaultier gown. 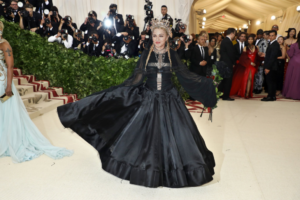 Anne Hathaway was loyal to one of her favourite houses, Valentino, in this sweeping gown in the house’s signature red hue. In-keeping with the theme, her head decoration was part halo, part crown of thorns. 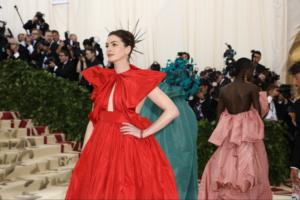 After the long red carpet, the stars were able to see the preview of the exhibition that this year sees relics from the Vatican City, including papal robes and accessories kept so far in the sacristy of the Sistine Chapel juxtaposed to the clothes on display, extrapolated from collections of high fashion and ready-to-wear of the greatest designers from the twenties to the present day – including Dolce & Gabbana, Valentino and Versace.


Warning: count(): Parameter must be an array or an object that implements Countable in /home/customer/www/romaluxury.com/public_html/wp-content/plugins/ultimate-responsive-image-slider/layout.php on line 15

We have been blessed with a variety of heavenly/infernal clothes. Many celebrities flirted with the Met Gala theme this year — the influence of Catholicism on fashion?

Tell us your opinion…Who was in your opinion the most daring and provocative glamorous red carpet star – and perhaps sacrilegious – of the year?

What is the Met Gala?

The Met Gala is the annual fundraising event for the Metropolitan Museum of Art’s Costume Institute in New York City. The invite-only event is helmed by Vogue’s Anna Wintour who controls the extremely-exclusive guest list.

They call it “the Oscar of fashion” and in fact its red carpet is a real celebration of the best of international fashion. Great fashion houses, dream dresses, stars from A-List, in two words: Met Gala.