The 75th edition of the Golden Globes 2018 that took place yesterday in the fabulous location of the Beverly Hilton in Beverly Hills, featured women as undisputed protagonists.

The year has just begun, that the red carpets left in the attic for some time already roll out. That of the Golden Globes, the awards that reward the best of cinema and TV, considered by all as an antechamber to the Oscars, was laid out last night in Beverly Hills. And to trample it on all the Hollywood stars A List that counts. This year the whole world of cinema and not only is united more than ever and fights hard for women.

Who runs the world? Power to women. Women ruled like queens, leaving no choice with their male counterparts, but to accept and honor their efforts.

All the celebrity stars showed their commitment against sexual abuse through their look. The Hollywood divas have chosen to wear a total black outfit in protest against violence against women in the cinema and in any other area. Obviously, not only female celebrities have taken part in the initiative.

Beyond the profound meaning, the choice of total black turned out to be a real enchantment for the spectators: sequins, feathers, embroidery and lots of trousers.

Each celebrity has his/her guru in fashion, especially if, in addition to employment, also born a beautiful mental understanding.  Many celebrities decided to shine with the most important Italian fashion excellences.

The iconic Angelina Jolie was stunning in an Atelier Versace total black long dress with strapless neckline and shee adorned with spectacular and sensual feathers; 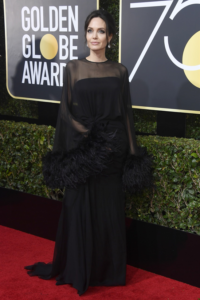 Saoirse Ronan (best actress of Golden Globe 2018) looked major with her  Atelier Versace black one-sleeved gown embellished with bright Swarovski crystals on the side and on the shoulder and elegant draping detail at the neckline; 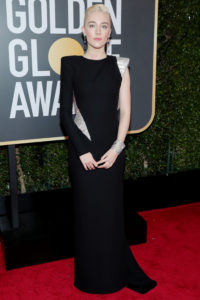 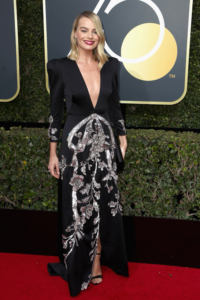 Diane Kruger was so beautiful to take the breathe away with a dress entirely in chiffon plumetis, crossed on the front and with a very light cape that falls from the shoulders. All edged by thousands of small metal drops, made in Prada. 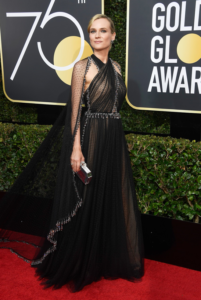 Jessica Chastain looked dreamy and ethereal in a custom Giorgio Armani Privè black velvet halter neck gown with an extensive train and a plunging back accented by silver and jet black crystal embroidery.

Mariah Carey arrived at the 2018 Golden Globes in a black form-fitting Dolce & Gabbana gown. This ruched mermaid style dress hugged the star’s curves perfectly. She looked put together, sophisticated and sexy all at the same time. 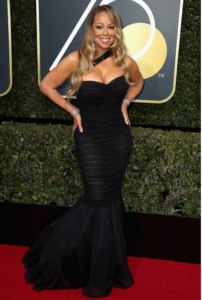 Mary J. Blige wowed at the Golden Globe 2018 a custom Alberta Ferretti gown which was in keeping with the night’s black dress code. 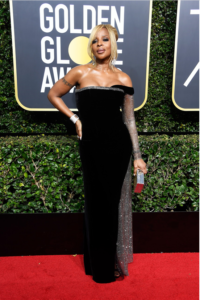 Allison Williams made a bold statement at the 2018 Golden Globes. The former ‘Girls’ actress donned an Armani Privé Spring 2017 gown which drew the attention upwards thanks to the orange semi-circular design on the bodice. 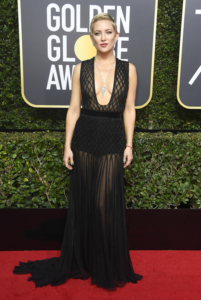 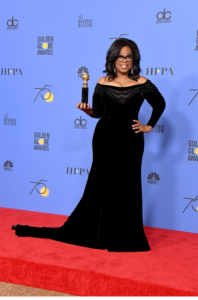 What is your favourite?

You want to know where to find them? We can give you an idea… in the eternal famous and beautiful capital city of Italy, rich in history and culture, and not only …Rome.

So what are you waiting, come to Rome and especially in the Shopping Gold Triangle, near the Spanish Steps, where you can find all the top brand stores.

Come here and lose yourself in the most luxury and ancient alleys of the world!

[…] a month ago the Hollywood stars had decided to dress up with very elegant black dresses during the Oscar’s night, the same happened last night during the British Oscars, the Bafta 2018, to support the […]

And the Oscars go to… Italian fashion designers. - Roma Luxury - THE BEST VIP Tours and Shopping Experience in Rome - Download App or Call Us
Reply

[…] to the total black dress code, the absolute protagonist of  the passed Golden Globe 2018 and the Bafta 2018, wide to the color. Powerful clothes for powerful and beautiful […]