Dolce Vita in Rome between stars, glamor and magazines 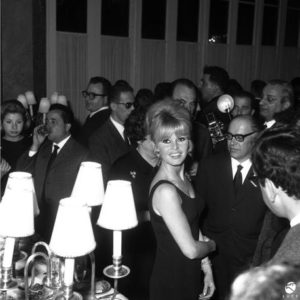 1956, Rome: Brigitte Bardot at a press conference at the Grand Hotel. For the French actress, 1956 marks the year of success, with the release of the film “E Dio creò la donna” (“Too many“, the first title in Italian) by the director Roger Vadim, with whom she will remain married until 1957. 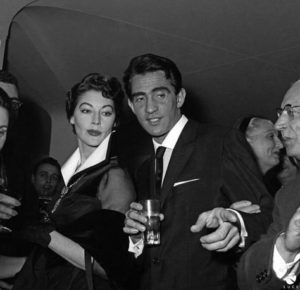 1956, Rome: Ava Gardner and Walter Chiari at a cocktail at the Sisters Fontana atelier. He, an actor already affirmed and back from various engagements, including the one with Lucia Bosè in 1953, and she, formally still married to Frank Sinistra from whom she will divorce only in 1957, will be the protagonists of a relationship that, between twists and journalistic clamor , it will arrive until 1959. 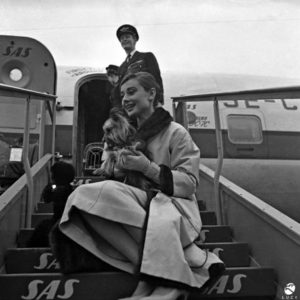 1959, Rome: Audrey Hepburn arriving at Ciampino Airport. The English actress bursts into the world of cinema in 1952 with William Wiler’s Roman Holiday and, precisely for this debut interpretation, in 1954 she was awarded the Oscar for Best Actress. Since then it will remain an icon of style and grace. 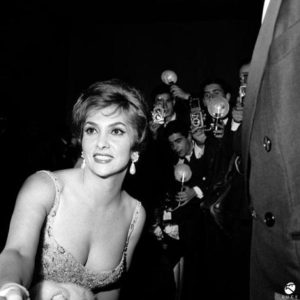 1960, Rome: The photographers are crowded around Gina Lollobrigida, portrayed during the premiere of the film Ben Hur. Diva for bravura, beauty and character, from the early fifties will be the absolute star of the international star system and the worldly news. 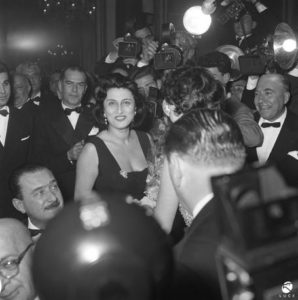 1956, Rome: Anna Magnani at the Grand Hotel for the Gala of Cinema. Among the greatest performers of Italian cinema, March 21 of the same year will receive the Oscar as best actress for the film “The Rose Tattoo” by Daniel Mann, where he had co-starred with Burt Lancaster. 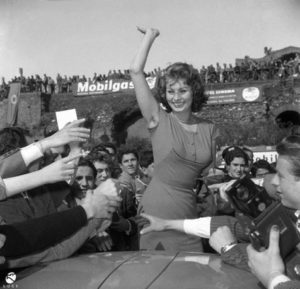 1956, Rome: Sophia Loren at the start of the III Rally of the Cinema. Founded in 1953, the event – organized by Ezio Radaelli – will have its own role in the construction of popular divism, bringing actors, actresses and directors to receive crowds in the stages touched between Rome and Sanremo by the motoring event. The actress, equal merit with Alberto Sordi, had won the previous year’s edition. 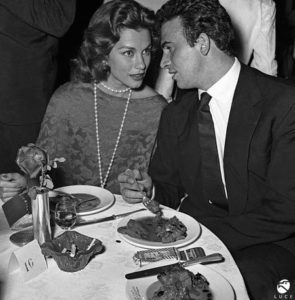 1958, Rome: Linda Christian and Maurizio Arena at the Belvedere delle Rose. The fairytale wedding with Tyrone Power, married in 1949, was formally finished in 1956, but long ago Linda Christian animates the pages of the chronicle that, among others, gives her a relationship with Maurizio Arena. The Roman actor of Garbatella (an historic neighborhood of Rome) had achieved success thanks to Poveri ma belli (1956) by Dino Risi will have great fame thanks to the lively nights of Veneto and to a more than contrasted love story with Princess Maria Beatrice of Savoy. 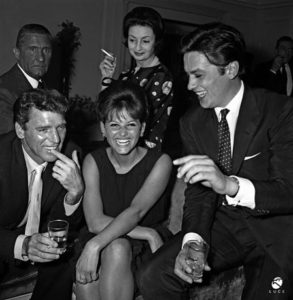 1962, Rome: Burt Lancaster, Claudia Cardinale, Alain Delon and, behind them, Paolo Stoppa. Directed by Luchino Visconti, the protagonists of Il Gattopardo ( The Leopard), Palma d’Oro at the 1963 Cannes Film Festival based on the novel by Giuseppe Tomasi di Lampedusa, are returned from the photo in an image of rare and timeless beauty. 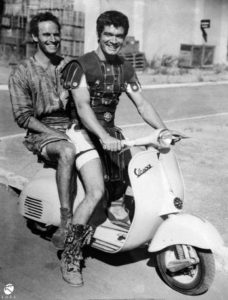 1959, Rome: Charlton Heston and Stephen Boyd in Cinecittà in a break from the work of Ben Hur. After a short television experience at CBS, in 1950 Charlton Heston made his film debut with The Black City by William Dieterle. The international limelight won it in 1956 with the interpretation of Moses in The Ten Commandments of Cecil B. De Mille, which anticipates the success it will have in 1960 with Ben Hur by William Wiler, which will be worth the Oscar for Best Actor. The Englishman Stephen Boyd, for the same film, will be awarded the Golden Globe for Best Supporting Actor. 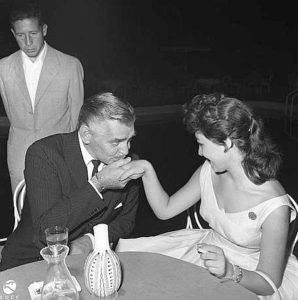 1959, Rome: Clark Gable is one of the movie stars in 1935, with the Oscar for Best Actor in Accadde una note (It Happened One Night) by Frank Capra, and in 1939 for Victor Fleming’s performance in Gone with the Wind. Charm, charisma and elegance give it to the history of cinema in the role of the handsome and scoundrel, so suitable as to reflect even his private life, where he collects five marriages and numerous flirts. The photo, taken at the presentation of La baia di Napoli by Melville Shavelson – his penultimate film in which he starred with Sophia Loren and Vittorio De Sica – returns a perfect image of seduction and masculine elegance. 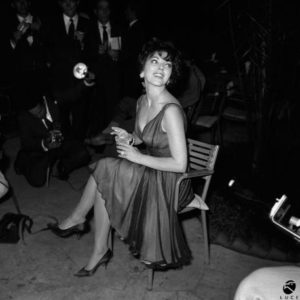 1960, Rome: Joan Collins at the Hassler Hotel for the presentation of Ester and the King of Raoul Walsh and Mario Bava. Five husbands, an endless series of flirts most often performed and declared, and a pin-up beauty have made Joan Collins the English answer to Elizabeth Taylor and one of the most talked about stars of the international movie star system. Her big hit in the 1950s is Leo McCarey’s Garden Missiles (1958) where she stars alongside Paul Newman. 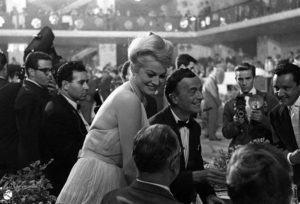 1959, Rome: Anita Ekberg with Schubert, the tailor of the divas, at the Palazzo dei Congressi for the Silver Mask prize. Before Federico Fellini’s La Dolce Vita, Anita Ekberg is already a diva. Miss Sweden in 1950, the irrepressible beauty and the producer Robert Hughes guarantee her open doors to Hollywood, her marriage to Anthony Steel in Florence, in 1956, has the headlines and the covers of the magazines present her as the anti Sophia Loren . Choosing it, Fellini is sure and will not be denied. Anita becomes a symbol and its name, alone, tells a whole era. 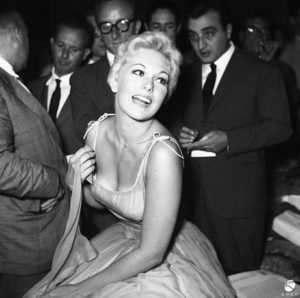 1957, Rome: Kim Novak at a press conference at the Grand Hotel. Presented by the American majors as the alternative to Marylin Monroe and Grace Kelly, in the early fifties she will play alongside actors such as Frank Sinatra, William Holden, Jack Lemmon, James Stewart and, in 1958, will reach the firmament of the stars with the interpretation from protagonist in The woman who lived twice by Alfred Hitchcock.

Rome: The Dolce Vita of the Star System